Last week I noticed a month-old post from F-Secure titled "Janicab Hides Behind Undocumented LNK Functionality" in my RSS Reader. I had starred it but never had time to read and analyze it thoroughly. Post title and their statement caught my attention:

But the most interesting part is the use of an undocumented method for hiding the command line argument string from Windows Explorer.

What is this undocumented functionality you're talking about? Tell me more! Unfortunately, they didn't provide any technical details just some screenshots.

I'm gonna fix that (and have some fun in process) smile

Armed with information from FSecure's post, I started Googling. In a few minutes I found VirusTotal scan and a couple of searches later the LNK file itself. Now what?

I'm not a LNK file expert and I don't have magic tools for analyzing them. So, I did what everyone else would - Googled again. There are 3 tools that can be found easily:

All of these tools showed the same information as VirusTotal scan - absolutely nothing useful. See for yourself in screenshots: 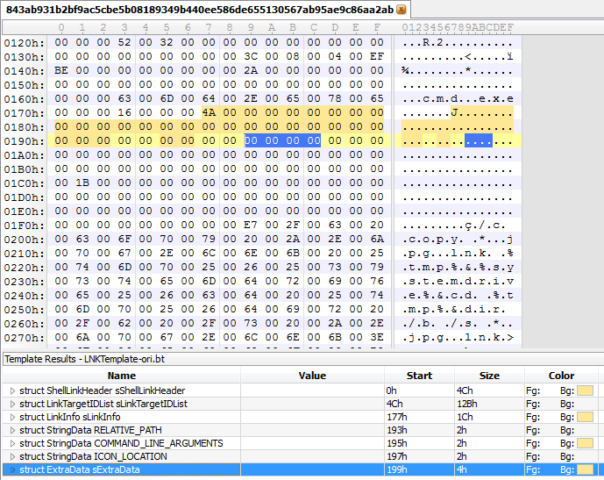 Marked in blue is the final structure of LNK file, as per 010Editor Template. COMMAND_LINE_ARGUMENTS are empty. And it looks like malware authors somehow managed to put the real command-line "/c copy *.jpg.lnk..." outside the defined structures, right? How's that possible?

So, I got an official Shell Link (.LNK) Binary File Format specification by Microsoft and started reading.

LNK file consists of sequence of structures of variable size. There's always size of the structure, followed by data. Right after it there's a next size and next data. Size, data, size, data.. It's very easy to process, just look at the size, read the appropriate number of bytes, process them. Repeat until done. How hard is that?

He just reads all the fields one after another and expects that the length of all the fields will be equal to the size of structure (LinkInfoSize). Sure, it might work on "normal" LNK files but we're dealing with malware and intentionally modified files here. wink

After fixing that and few more bugs in the template, I was able to see the proper structure of this LNK file: 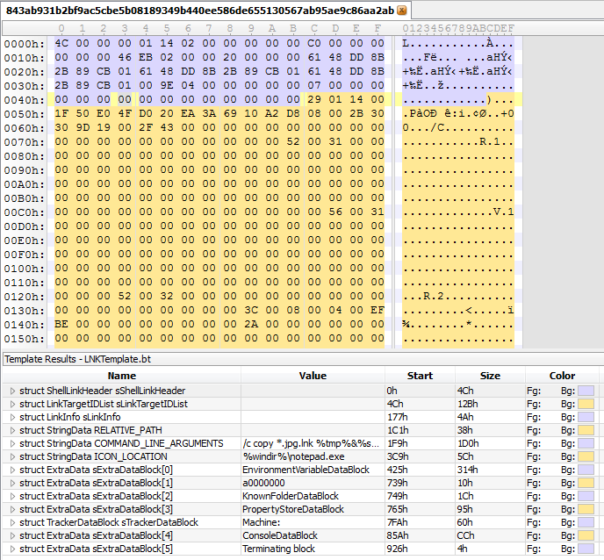 Command-line passed to cmd.exe is exactly where it should be, so why is Windows Explorer having problems with it?

Well, let's look at the file in more details. 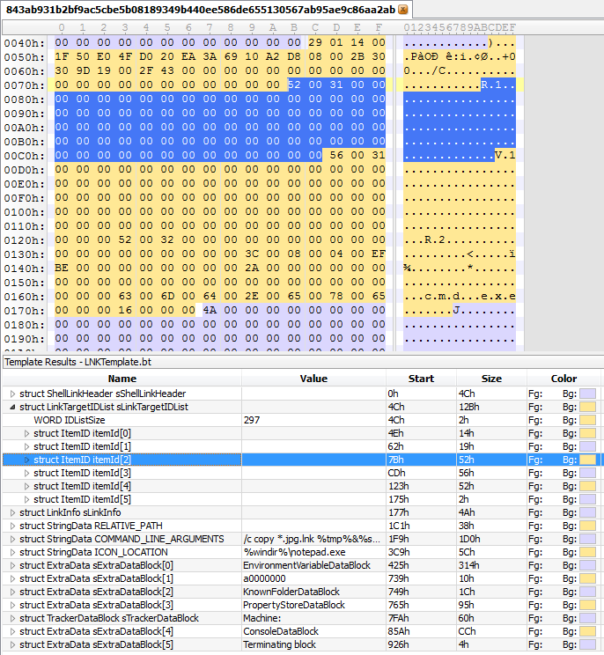 Looks like someone took a hex editor and just filled with zeroes every possible field in most of ItemID structures. 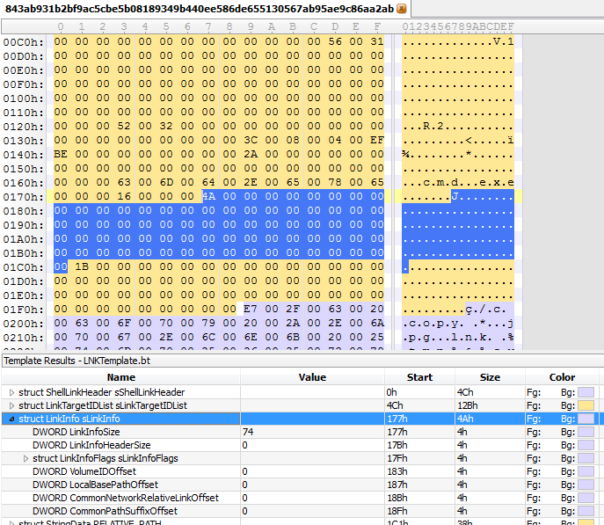 Same in LinkInfo, lots of zeroes. 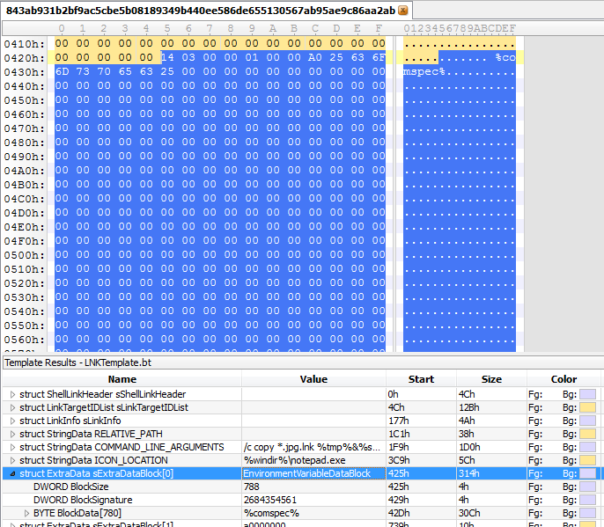 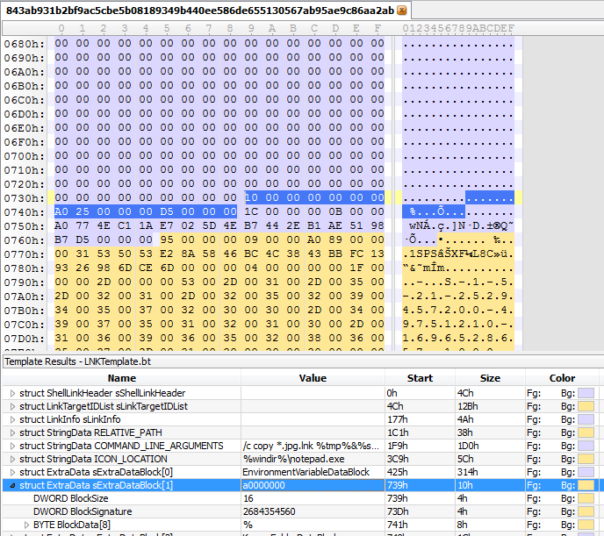 Hmm, this is interesting, 0xA0000000 is not a defined ExtraData structure ID according to MS spec.

Well, there are lots of changes but which one(-s) are causing the Explorer cockup F-Secure is mentioning? There are two ways to find it - debugging Windows Explorer shell, or making a test LNK file and filling it with zeroes until Explorer breaks. First one would be fun, but second one will be definitely faster. wink

After few attempts, I found the culprit: it's the modified EnvironmentDataBlock.

So, now you know. Adding empty EnvironmentDataBlock to any shortcut and setting ShellLinkHeader.LinkFlags.HasExpString = 1 will cause Windows Explorer to hide your command-line (but not exe name) from the user. twisted

I wanted to finish my analysis but some things were still bugging me. 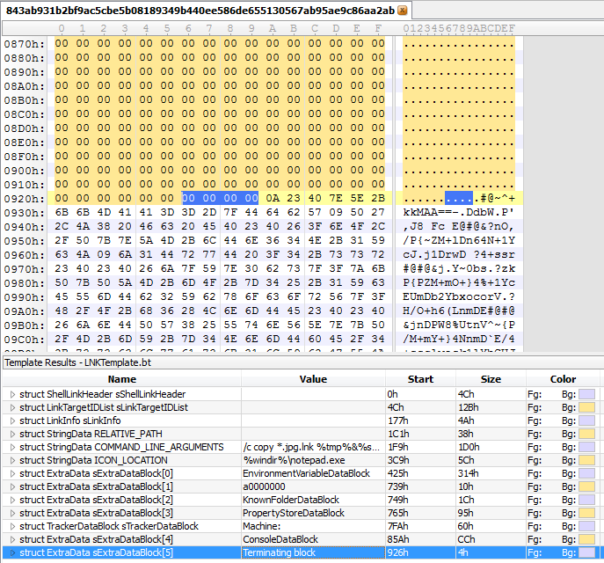 What are these data after the end-of-file marker? And why is this LNK file 500+KB in size?

The answer is simple - it's using steganography to hide malicious VBScript inside.

Let's look at the commands passed to cmd.exe, I'll just prettify them a bit. To do it properly, you need to know about command prompt escape characters, like "^" (at first I didn't and FSecure got it wrong in their blogpost, too! wink ). These are the actual commands:

So, what is being written into .bat?

First 2 lines just copy our evil file to z9. I really don't know why file copy is done via environment variables, maybe it's some sort of anti-antivirus trick to hide the malware origin.
findstr treats z9 as text file and copies all "lines" of text that contain "#@~" into a file 1.vbe. If you Google a bit, you'll learn that encrypted VBScript files have extension .vbe, consist of one long string and start with magic bytes "#@~^"".
Then a script gets executed, LNK file deleted and stupid user ends up being pwned. smile

Now, the bytes after end-of-file marker in LNK file start to make sense. 0x0A is new-line that's necessary for findstr, and then comes encrypted VBScript. Nice example of steganography, lots of black command-prompt scripting magic, I really like it! wink

Decoding VBE file and analyzing it - that's a matter of another blog post. Yes, it's really on my todo list.

I spent few more evenings working on the LNK template. It was just bugging me, to have something so useful, yet so terribly broken. So, I'm happy to present a fully reworked version that should be much more stable and able to deal with malicious LNK files in much better fashion.

This was a fun evening project. I learned a lot about 010Editor Binary Templates, learned something new about LNK files and got a refresher course in CMD scripting and steganography. Writing this post took much much more time than the actual research, though.

If you want to have some fun too, you can use my 010Editor Template to edit your LNK files. Or make a simple tool in C#. Or create a LNK obfuscation service webpage in PHP. Possibilities are endless! smile

Obviously I won't give out link to an actual malware (if Google is your friend, you can find it anyway) but here's a demo LNK file I put together just for fun: http://www.mediafire.com/?gmphyn0mkmmyuag

It's harmless, trust me! bigsmile