While doing some research on ILProtector, I loaded my test executable in Olly. To much of my surprise, it refused to run and all I could see in Olly log, was this:

I disabled all non-standard plugins, and I was still getting the exception. It was only after I removed the remaining 2 plugins (ScyllaHide and ODBGScript) that my test application launched. Few more restarts and I was sure that ScyllaHide is the one causing the trouble.

OK, I've found a bug in ScyllaHide. But where is it? Which option is causing it? And how can I fix it?

Unfortunately, there is no easy way. Just go through one option after another, until you trigger the bug. 10 minutes and 100 rude words later I was sure that "HeapFlags" is the culprit.

A side note from Captain Obvious 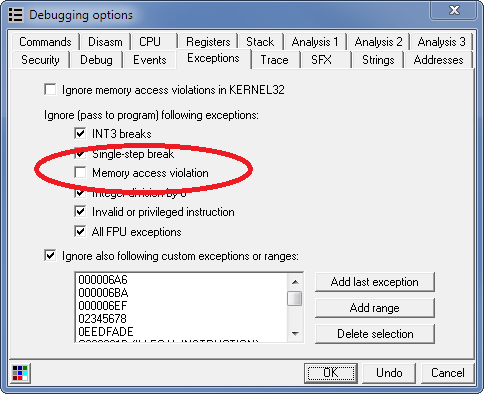 and then run your target: 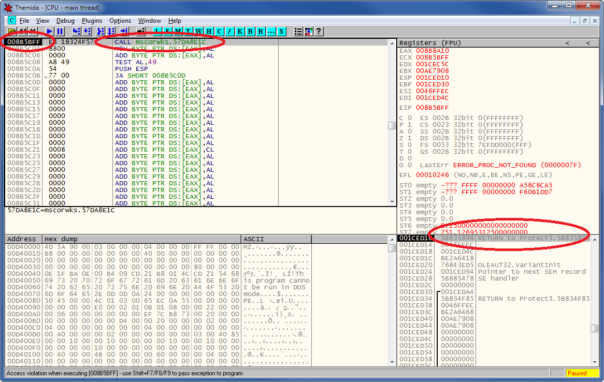 Here we can see that there is a real code at this address - small stub calling mscorwks.dll and that the call comes from ILProtector's protect32.dll.

It immediately gives you plenty of useful information about what's happening. Unfortunately I debugged one instance of Olly from another instance of Olly - got the same results but it took me much longer.

It turns out that .NET Runtime Execution Engine (mscoreei.dll) loves to put executable code on heap:

but ScyllaHide prefers to mark all heaps as non-executable:

and these 2 options kinda conflict with each other. smile

This small bug can be used to detect ScyllaHide, as it's enabled by default in all configurations, and tooltip explicitly suggests to leave it as-is:

Very important option, a lot of protectors check for this value.

Here is a suggested patch:

If you don't want to recompile the entire Scylla, here's the binary patch for the official ScyllaHideOlly1.dll from ScyllaHide_v1.3fix_Olly1.rar package:

As a simple workaround, you could uncheck "HeapFlags" in ScyllaHide when debugging .NET applications. However, I would really suggest to fix ScyllaHide instead.