Control Flow Guard (CFG) is less-known security feature in Microsoft Windows 8.1+. It is designed to prevent exploitation of indirect calls in executables.
For CFG protection to be effective, it must be enabled in both compiler/linker and operating system.

As for operating systems, Windows 8.1 Update 3 (released in November) and Windows 10 have enabled CFG. Older versions of Win8.1 had support for CFG, but it was disabled.

Currently, none of officially released versions of Visual Studio have support for CFG. In the preview version of VS2015, you can enable it manually by:

Then build your project and you're done.

When compiler is about to emit indirect call like

it checks if Control Flow Guard is enabled. If it is, the following sequence is emitted instead:

___guard_fids_table is array of all functions defined in the EXE:

___guard_check_icall_fptr is a pointer to GuardCFCheckFunction. By default it points to simple "retn" instruction.

So, this executable will run without any problems on older OS.

But when a newer OS loads such executable, it will overwrite pointer to GuardCFCheckFunction with pointer to ntdll!LdrpValidateUserCallTarget: 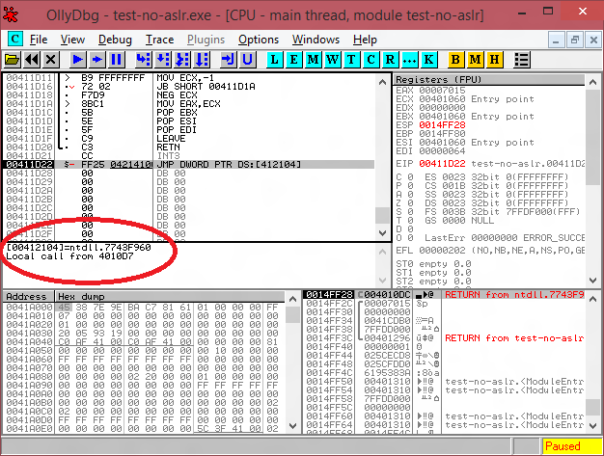 Now every indirect call from this module will be checked by LdrpValidateUserCallTarget before execution. If called address is not present in GuardCFFunctionTable, OS will terminate process with:

What does it mean for reversers

Maybe I'm not that excited but still think that CFG is a very useful feature.

You don't need to guess anymore if this is code or data, EXE comes with a nice list of all functions.

One breakpoint to rule them all

Packing your executable can break CFG

If your protector does not support CFG properly, your EXE will not work at all. Or it will work, but will not benefit from CFG. For example, packing my test EXE with standard UPX 3.91 produces an EXE file that will work in all OS until Win7, but will not run on Win8/Win10.

Simple workaround is to zero out LoadConfiguration directory RVA/Size in PE header, or to remove IMAGE_DLL_CHARACTERISTICS_GUARD_CF flag (value: 0x4000) from DllCharacteristics field in PE Optional Header.

Currently I'm not aware of any common protector that would correctly support CFG.

If you're hooking some functions by overwriting entries in vtable (quite a few game cheats do that), you must pay special attention to CFG. You can either update GuardCFFunctionTable or remove CFG support from the patched module using one of the methods mentioned above.