In the first part of the series I explained how some cheat authors try to protect their work against other cheaters. It was a quick introduction to Unity3D and bugs in Mono that cheat authors exploit.

Last week someone emailed me another example of a game cheat. My tool from the previous article failed to fix invalid metadata, so I decided to look at it again.

The cheat I received was made by Mod4U from BlackMod.net team. It appears that Mod4U is one of the most active members of the team, judging by number of the releases. His/her cheats use invalid PE file tricks and are encrypted, as you'll see later in the article.

After looking at different mods from other team members, I've confirmed that Rito, Aurora and Legend also are using invalid PE files for hiding their work. But none of their cheats encrypt Assembly-CSharp.dll.

So, let's look at the cheats and see what new tricks BlackMod team members have found!

Just like in my previous article, I'll be using Mono sources from commit 74be9b6, so that they would more or less match the code used by Unity3D.

Mono ignores pretty much every field from CLI header in mono_image_load_cli_header:

How long is the version string?

Call the length of the string (including the terminator) m (we require m <= 255); the length x is m rounded up to a multiple of four.

Mono throws specification out the window and does it in another, completely broken way:

Mono accepts version_string_len that is not rounded to multiple of four and rounds it up automatically. It also accepts string length larger than necessary.

This is a very interesting bug, as it affects most of the commonly used .NET reversing tools.

Mono processes only the lowest 3 bits of HeapSizes in load_tables:

and completely ignores flag value 0x40 which is quite crucial.

When ExtraData flag is set, there is one more field present in .NET metadata::

.NET runtime and tools based on dnLib respect the flag but Mono completely ignores it. D'oh!

Mono doesn't check size of #~ stream at all. Really. It accesses all the #~ fields with no validation whatsoever:

So, you can set size of #~ stream to a random number and Mono will be happy. CFF will be happy as well. But any other tool will complain.

but doesn't check values for correctness. So, it will also accept insanely large values for heap_blob.size.

The only checks are done when reading from #Blob stream and only ensure that index is smaller than the declared #Blob size:

As I already mentioned, Mod4U is the only Blackmod team member who uses this type of protection. To learn how exactly the protection works, please read my previous post.

Today I'd like analyze different encryption methods used by Mod4U. Data show that Mod4U keeps stealing the protection mechanisms from others!

On 24-Jun-2018, Mod4U released Dragon Spear v1.25 MOD. APK contains Assembly-CSharp.dll encrypted using simple NOT operation. It also contains libmono.so for armeabi-v7a architecture which is protected by some protector that I can't recognize.

Thanks to VirusTotal, we can track this libmono.so back to a Chinese game from year 2016, called Lance Town. Stolen! smile

On 12-Jul-2018, Mod4U uses different encryption in his/her Noblesse M Global v1.2.0 release. APK contains libmono.so for armeabi-v7a architecture and it's not protected at all. This is the exact same encryption that was used by AndroidThaiMod and described in my previous post.

Additional VirusTotal search shows that this protection has been used by different teams since August 2017. Stolen! smile

Starting from 24-Jul-2018 release of Boxing Star v1.1.2, Mod4U uses yet another version of libmono.so. Now there are 2 libmono.so versions - one for armeabi-v7a and one for x86 architecture.

This version of libmono.so seems to be stolen from a different Chinese game! smile How else can you explain presence of the exact same code described in Pediy post about Chinese game and reference to ThreeKindom.dll? And the function name rvlt_modify_data_with_name - a reference to RevolutionTeam who released the game.

Platinmods is another Android modding team using pretty much the same tricks.

I took just a quick look at their releases (eg. BLEACH Brave Souls v7.3.1) and found that they employ another encryption method (Xor 0xFB).

According to VirusTotal, that particular version of libmono.so has been used by Vietnamese modding team W4VN.NET since April-2017. 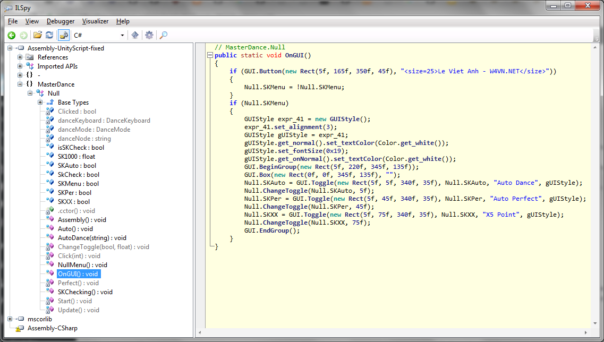 Update for my tool

My original intention was to make a SIMPLE tool that helps you to fix the broken PE file and metadata. My tool does exactly that.

Most of the tricks that I described are trivial to fix. Check the value, if it's incorrect, overwrite it with correct value. Repeat until done. Something like this:

However, "Invalid #~/#Blob size" tricks are particularly difficult to fix. My tool cannot magically support all possible cases, not without writing full .NET metadata reader/writer. And I don't want to do that, sorry. wink

As predicted in my previous article, cheat authors are willing to exploit any and all bugs in Mono to hide their work from others. Some of the bugs they've discovered are really surprising and affect more than just one tool. I expect cheat authors to continue finding new and innovative ways to hide their code in the future as well.

Next time I'll look into... well, I have no idea! bigsmile

P.S. If you still can't make some DLL work, please send me an email (or leave a comment below). I'll look at it and try to help you.