Known issue - for x64 executables exception directory is not restored. The unpacked executable will work until an exception happens. If you find any such executable, please send it to me and I'll work to improve the unpacker. 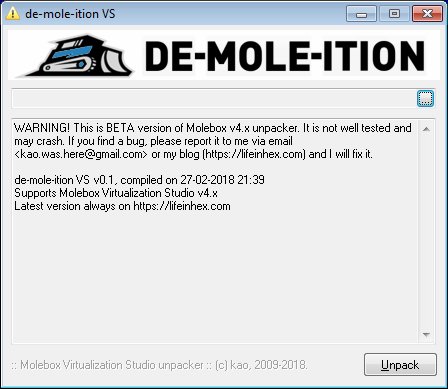 This is first BETA release of static unpacker for Molebox v4.x. It works for most of the files in my collection but is not well tested by any means. If you notice any bugs (trust me, you will!), please let me know.

Known limitations: way too many. Few most important ones:

So, why release it? I've had it like this for 5+ years now. It almost works. But without your feedback it will stay in this "almost working" state forever. The more bugs you report, the bigger the chance that I'll finally finish this project.. So, have fun!

Bugs reported by users. I'll work to fix the when I get some free time.

49 thoughts on “February update of unpackers”