There are few minor fixes:

Let's see how super this protection really is! smile
END_OF_DOCUMENT_TOKEN_TO_BE_REPLACED

END_OF_DOCUMENT_TOKEN_TO_BE_REPLACED 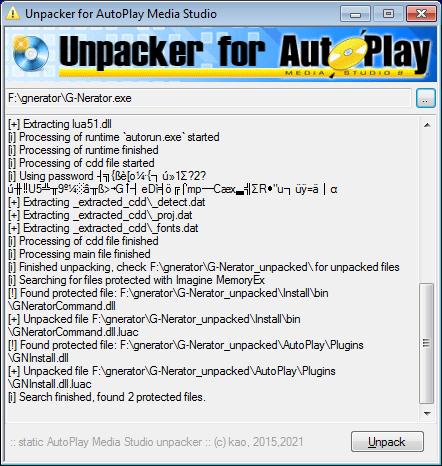 Thanks to Cristiano, I was finally able to add support for another old version of Molebox 2.x. While working on that, I found and fixed few other bugs in the unpacking, so really - thanks a lot! smile
END_OF_DOCUMENT_TOKEN_TO_BE_REPLACED

I'm trying to get back into reversing. Slowly.

So, here's a long-promised update to Molebox unpacker. It fixes unpacking of very, VERY, VERY old Molebox versions. The only file I have ever seen packed with it, is SCWU role playing game.

This was done long time ago but I never posted it publicly. Support for Enigma Virtual Box 9.30/9.40. Should support 9.50 but it's not tested.

This update fixes unpacking very large embedded files. Before the fix, unpacker would crash with "out of memory" exception when embedded file was larger than ~800MB. Thanks to MMM for reporting the bug.

END_OF_DOCUMENT_TOKEN_TO_BE_REPLACED

This is a quite big update for Molebox VS unpacker. It fixes most of the bugs I'm aware of:

It's still not perfect and will fail in some situations - but I didn't want to postpone the release any longer. Please let me know if it crashes for you and I'll try to fix the problem. smile
END_OF_DOCUMENT_TOKEN_TO_BE_REPLACED

Setting TMP folder to a RAM drive was a good idea in 1990s. Now it's year 2019 and you can't manage virtual memory better than Windows already do. But some people apparently still try, so I added checks to stop them from shooting themselves in the foot.

The fix was actually implemented a long time ago, I just didn't make the announcement.