There are few minor fixes:

This month brings us not one but two updated unpackers! smile

For one of my private projects, I needed to decrypt some data. Original executable uses Enigma's EP_CryptDecryptBuffer function but I needed to implement the same thing using .NET. Much to my surprise, there was no information about what encryption algorithm is used by Enigma or how it works internally. So, I started by compiling Enigma's sample project CryptBuffer and debugging the executable.

After protecting my executable with Enigma, few assembly lines

got changed into something horrible that looked like an Enigma's VM:

I didn't feel like spending my time on analyzing that. Much easier solution was to put hardware breakpoints on my data and password and wait for them to trigger. In a few seconds I landed into code that looked like MD5 (notice the constants!):

and few hits later I landed into code that I didn't recognize at first:

Delphi compiler had helpfully included RTTI information telling me that this second piece of code belongs to a class called TIdeaCipher. Now I had all the information I needed, I just had to put it all together. smile

There aren't many IDEA implementations in C#. In fact, there are 2: by BouncyCastle and by LexBritvin. Since I'm not a big fan of huge and complex libraries like BouncyCastle, so I took the simplest possible code: from Github and modified it a bit.

Second, we need to add support for CBC mode. It requires both calculating correct IV value and pre/post-processing each block we're encrypting or decrypting.

Calculating IV is quite simple:

Processing each block is slightly harder but not a rocket science either. As explained in image borrowed from Wikipedia:

Few more cosmetic changes and that's it! We got clean and nice implementation of EP_CryptDecryptBuffer in pure C#. smile
Download link: https://bitbucket.org/kao/ep_cryptdecryptbuffer/

P.S. My implementation only supports cases where data length is divisible by 8, adding support for other lengths is left as an exercise for the reader.

Data get truncated at the end of first line.

It gets virtualized as a string value "hex(0):"

Have fun (and remember to test your software properly)!

Now my unpacker detects Enigma Protector and nicely explains to user that's it's not the same as Enigma Virtual Box. Something like this: 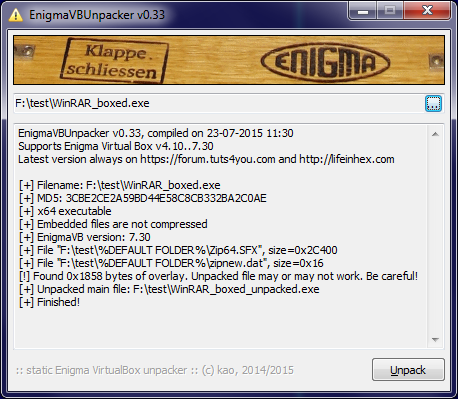 I added support for Enigma Virtual Box 7.30, (hopefully) fixed all issues with very long filenames and fixed an issue with processing command-line.

Thanks to ManOfWar for constantly supplying new challenges and parrot for bringing my attention to a bug with command-line.

Here comes a new version. smile This time I added support for unpacking external packages. "External packages" are data files that can be loaded by Enigma Virtual Box and can contain both embedded files and registry entries.

I also made my unpacker 100% Unicode-aware - there should not be any more problems with non-english filenames. But I had to switch to Delphi 2009 compiler to do this, so there might be some unexpected bugs lurking around.

And, of course, lots of internal bugs had to be fixed. My code is not perfect, you know! wink 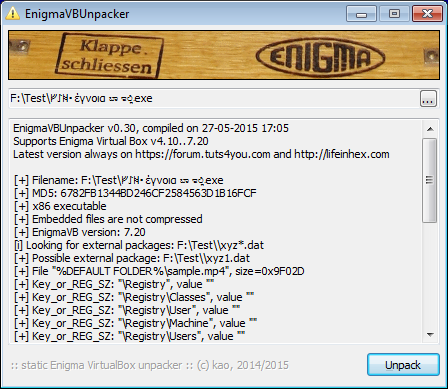 P.S. Thanks to Manofwar for giving me few example files for development & testing!

Last few weeks have been really hectic. I moved to a new apartment, so lots of time was spent on packing, unpacking, cleaning, and other non-computer related chores. Finally it's done, I got a great new place to live and I'm happy. smile

To relax and get back into shape, I spent an evening with one of my old projects - Enigma Virtual Box unpacker. I fixed few little bugs and added support for x64 executables. 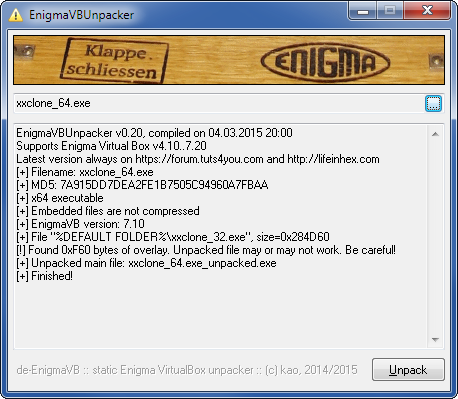 Get it here: Please get latest version from this post