As with the XSS campaigns, almost all of the attacks are targeted at older vulnerabilities in outdated plugins or themes that allow files to be downloaded or exported. In this case the attackers are attempting to download wp-config.php, a file critical to all WordPress installations which contains database credentials and connection information, in addition to authentication unique keys and salts.

Since WordFence is in the business of selling "the best WordPress security", they have little intention to explain how these attacks really work.

Instead, they blatantly advertise their product as a remedy for everything:

All Wordfence users, including sites running the free version of Wordfence, and Wordfence Premium, are protected against these attacks.

That's really not helpful, so let me fix that. smile
END_OF_DOCUMENT_TOKEN_TO_BE_REPLACED

Every once in a while someone writes a scary article telling us how the most frequent password still is "123456" and how very bad it is.

That's an utter load of crap.

I know a bit or two about computer security. Yet, my most commonly used password is "password". And that's not going to change anytime soon. 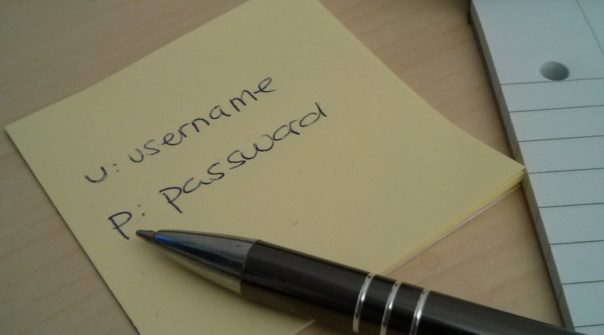 END_OF_DOCUMENT_TOKEN_TO_BE_REPLACED

Few days ago I started seeing ads on ebay. Weird.. confused I blocked the ad manually and forgot about it. The next time I visited ebay, the ad was showing again. I blocked it again. Third time.. Yes, you guessed right, the ad was back. So, I started to investigate why my filter rule was not working.

This rule disables all cosmetic filters for eBay. But where does it come from?

I went to examine my filter lists. And then I went into full WTF mode:

Why the fuck I have "Acceptable Ads" list enabled?
END_OF_DOCUMENT_TOKEN_TO_BE_REPLACED

I've complained about Chrome automatic updates before. I actually stayed on outdated Chrome 45 for a long time because I really needed NPAPI support to perform certain tasks.

But few months ago I decided to bite the bullet and "live a normal life". So, I enabled Google Chrome updates and crossed my fingers. It worked for some time. I got the awful "modern UI" and managed to turn it off. I got the automatic Chrome sign-in that nobody actually wants and Google retracted later. And I was able to turn it off too.

When logging into Gmail it just pops up this message "Can't sync to account. Request cancelled."

END_OF_DOCUMENT_TOKEN_TO_BE_REPLACED

Yesterday I read an article on ZDNet called "Researcher finds simple way of backdooring Windows PCs and nobody notices for ten months" and it made my laugh hysterically.

Why? Because it's a bloody nonsense from start to end.

Let's just look at the main claim in the article.

... in cases where a hacker has a foothold on a system --via either malware or by brute-forcing an account with a weak password-- the hacker can give admin permissions to a compromised low-level account, and gain a permanent backdoor with full SYSTEM access on a Windows PC.

I just read the article on ZDNet: "Atlanta projected to spend at least $2.6 million on ransomware recovery". Yes, you read it right - $2'600'000 to clean up the Atlanta city network from ransomware. And, of course, taxpayers will pay the bill. smile

Dear City of Atlanta, this situation will not magically resolve itself. Your IT guys must take the responsibility for this failure. Fire your CIO. Fire your entire IT staff. Sue them all for the damages. And let them rot in prison for a few years for gross negligence.

IT guys are not special snowflakes, they don't do magic, and they must be held accountable for their (in-)actions just like everyone else. Only then we'll see some improvements in security.

But I'm sure City of Atlanta knows better. After all, they decided $600'000 on advisory services from Ernst & Young on how to handle security incidents. That's a money well spent! </irony>

Every once in a while, I read an article about security which is so incredibly bad that I just have to comment on it.

This time, it's an article from iTWire called "When F00F bug hit 20 years ago, Intel reacted the same way". It's written by Sam Varghese who claims to have decades of experience in the field. Let's see.. 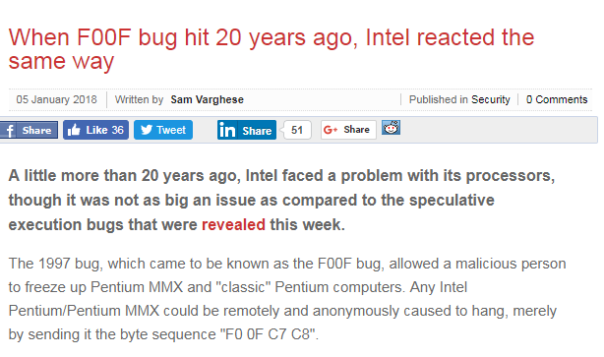 Let me write that down!

Any Intel Pentium/Pentium MMX could be remotely and anonymously caused to hang, merely by sending it the byte sequence "F0 0F C7 C8".

This statement is incorrect in so many ways!

Yes, there was a bug in Pentium CPUs. CPU would freeze when executing instruction lock cmpxchg8b eax which has the opcode "F0 0F C7 C8". Can you see the difference?

Dear Sam Varghese, please stop writing about security. Open a hotdog stand or do anything else that doesn't involve computers. You just don't get them.

Main reason for writing this blog-post is the extremely crappy article by Vallejo named "Installation and First Contact With the New WinDbg". I read it, cried for a few minutes and decided to fix it.

Having said that, let's go through some of the most "brilliant" Vallejo's statements!

We execute WinDbg from installation shortcut and we search the main process.

Dude, when your article is called "Installation and first steps..." shouldn't you start at the beginning and tell us where to get this app and how to install it?

You need to get the app from the Windows Store: https://www.microsoft.com/store/apps/9pgjgd53tn86.

No, there is no real technical reason for that, just another attempt of Microsoft to convert you to Windows 10 and make you use their Windows Store.

To make matters worse, you need to have installed the latest and greatest update of Windows 10 to do that. There is no technical reason for that, either. 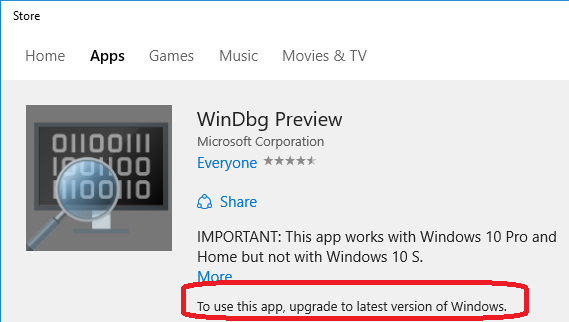 After you've jumped through all those hoops, you get this nice and shiny Windows Store app. Windows Store apps get installed under "C:\Program Files\WindowsApps\" and this one is no different. At the moment of writing the application version was 1.0.16, so it got installed into "C:\Program Files\WindowsApps\Microsoft.WinDbg_1.0.16.0_x86__8wekyb3d8bbwe".

The installation creates another exe here: C:\Users\<user>\AppData\Local\Microsoft\WindowsApps\WinDbgX.exe. It is zero bytes, and if you try, for example, to copy it, you can’t.

Because it's a reparse point, not an EXE file.

Same thing goes for all other applications Vallejo "found" under C:\Users\<user>\AppData\Local\Microsoft\WindowsApps\, like dbgsrv64.exe:

You can read more about aliases on MSDN: Start your app by using an alias.

I have not found a tool or way to manage or get information about these files.

Ever tried fsutil? It's been part of Windows since Windows7.. bigsmile 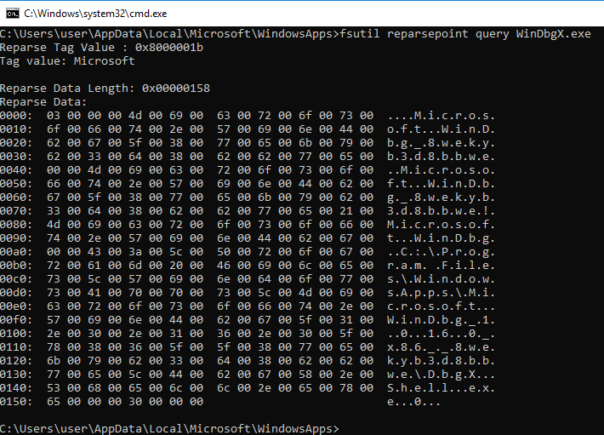 Sure, you can Google for that - but it won't tell you much, except that it's not really documented and should be left alone. 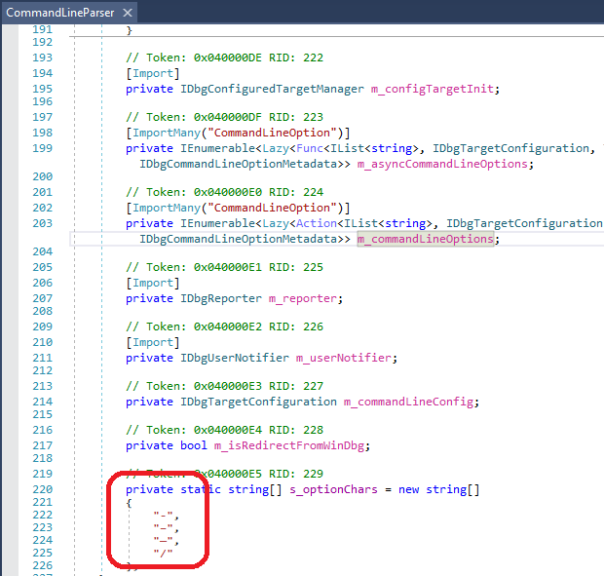 Ok, that was enough criticism for one day. Let's do something more constructive!

Remember how I said that there is no technical reason why WinDbgX should be available only on Windows 10 and only as a store app? There really isn't. smile

Here's WinDbgX running on my Windows 7 and debugging one of the FLARE2017 crackmes: 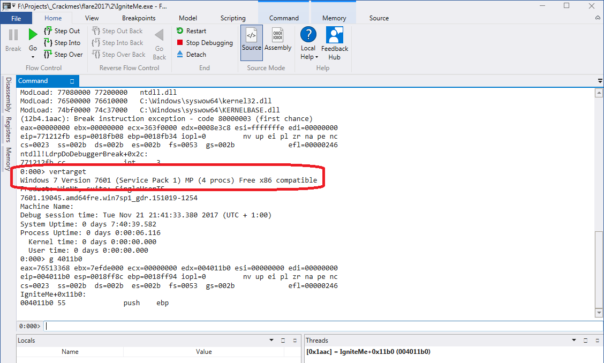 It's actually a really simple fix.

There are 3 more places in DbgXUI.dll, DbgX.Util.dll and Extensions\DbgX.External.dll that might need similar fixes. But that's behind the scope of this article.

It is true that classic WinDbg looks really dated. So, I can totally understand why Microsoft would want to create a replacement with a better UI. However, WinDbgX falls short on everything - its installation via Windows Store is brain-dead stupid, its user interface is confusing (who would look at Model->Change Query to change debugger settings?!) and severely limited (no multiple Memory windows, seriously?). If it was a school project, it wouldn't get even a B-. But for some reason, Microsoft insists that this is the only way forward. Oh, well.. sad

At least, the DLLs are not obfuscated, so someone can take them and make a much better UI.. wink

2 days ago everybody started talking about DoubleAgent attack that Cybellum supposedly invented and how every Windows OS since Windows XP is screwed. As soon as I read about it, I said "hmmm, where have I seen it before?".

While the rest of the world went on writing sensational news articles, Alex Ionescu summed up it all up in one nice tweet:

Have fun and don't believe in everything you read - too many morons are writing about security these days..

I read Kotaku's article called "FBI Says Alleged Hackers Used FIFA To Steal Millions From EA" this morning. And it reminded me of the crap articles Catalin Cimpanu writes at Softpedia.

Well, pretty much everything.

First, this group did not steal from Electronic Arts. If fact, not a single penny of real currency was taken from EA.

According to an unsealed FBI indictment, Clark and his co-defendants allegedly built a tool that would send false signals to EA’s servers to spoof matches, generating these FIFA coins at a rapid rate. The FBI alleges that Clark and crew then sold the coins to third-party sellers, earning millions.

Exactly! Guys received FIFA coins from EA (it's an in-game currency) which they later sold on underground sites. Money came from persons entirely unrelated to Electronic Arts and it was given voluntarily. And that, by definition, is not a theft.

The article continues with a plenty of other funny statements like

.. worked with the defendants to get Xbox development kits and reverse-engineer a pirated copy of FIFA 14 using a program called Interactive Disassembler. This process took several months, Alcala said, but it allowed them to create a tool for mining FIFA coins.

I just love the IDA reference in here. bigsmile These guys used disassembler, they must be real evil hackers! All in all, this article is a fun read but it got all the basic facts wrong.

Mr. Jason Schreier, please stop writing about things you have no clue about. Stick to your video game reviews or something.

What is really happening?

Thankfully, UK journalists have much better idea of what's happening in US courts, and they wrote a much better article. According to the indictment, the charges are "conspiracy to commit wire fraud", a stupid catch-all term used in US courts for pretty much everything done over the Internet.

That document is equally funny read and shows how desperate the prosecutors must be to make any charges stick. Let's see:

Naturally, the defendant has pled not guilty to the charge. And if his lawyer is any good, I'm guessing he'll walk out of the court as a free man.