END_OF_DOCUMENT_TOKEN_TO_BE_REPLACED

Final release in 2018 fixes a bug that was reported by dehola.

This part is more about my own failure than about Unity3D or Mono. I enjoy looking at Android game cheats and how they manage to exploit every single bug in Mono engine used by Unity3D. And then I make equally stupid bug in my fixer tool. How embarrassing! oops

Well, not really. I don't pretend to be perfect. I make mistakes just like everyone else and I have no problem admitting them. And hope that somebody else will learn from my mistakes, too.

So, today we'll look at the Vietnamese app that has a funny way to encrypt DLLs:

First, I'll show how the main module is encrypted in the original app. Then I'll analyze a modded version of the app on which my fixer tool failed miserably. Finally, I'll provide a fixed version for my tool.

END_OF_DOCUMENT_TOKEN_TO_BE_REPLACED

This is Part 3 of the series about tricks in PE file format used by Unity3D-based games and cheats.

This part will cover tricks used by game developer Moonton in their games:

All games use modified versions of libmono.so containing few tricks that nobody else uses. Different versions of libraries have slightly different ways of implementing these tricks, most of my analysis is based on Mobile Legends: Bang Bang v1.3.25.3323.

END_OF_DOCUMENT_TOKEN_TO_BE_REPLACED

In the first part of the series I explained how some cheat authors try to protect their work against other cheaters. It was a quick introduction to Unity3D and bugs in Mono that cheat authors exploit.

Last week someone emailed me another example of a game cheat. My tool from the previous article failed to fix invalid metadata, so I decided to look at it again.

The cheat I received was made by Mod4U from BlackMod.net team. It appears that Mod4U is one of the most active members of the team, judging by number of the releases. His/her cheats use invalid PE file tricks and are encrypted, as you'll see later in the article.

After looking at different mods from other team members, I've confirmed that Rito, Aurora and Legend also are using invalid PE files for hiding their work. But none of their cheats encrypt Assembly-CSharp.dll.

So, let's look at the cheats and see what new tricks BlackMod team members have found!
END_OF_DOCUMENT_TOKEN_TO_BE_REPLACED

As requested by fury...

For last few years I'm taking part in the FLARE-ON competition. This year I finished 4th - which is not bad at all. smile 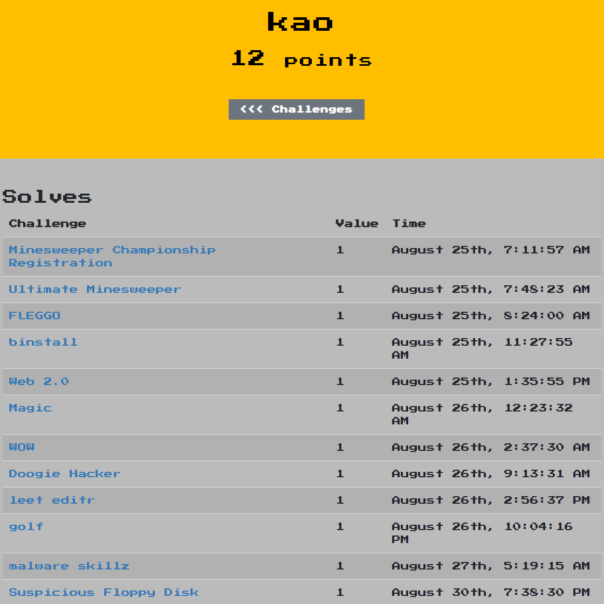 Now that the challenge is over, it's fun to read all the solutions. Of course, there are official solutions - they explain what the challenge does and one way how to solve it. Nice but I want more. smile
END_OF_DOCUMENT_TOKEN_TO_BE_REPLACED

Last few months have been... extra busy. I survived HDD crash, participated in Flare-On reversing contest (and finished 4th!), had quite fun projects at work - but all that is a matter of another story. Today I want to share with you a long-overdue update for unpackers.

If you have a file which uses "hide files" feature of Molebox VS, it only stores hash of the filename - original filenames are not stored anywhere. But if you have a good idea what the filename might be, you can add it to mole_dictionary.txt and my unpacker will use that for intelligent guessing.
END_OF_DOCUMENT_TOKEN_TO_BE_REPLACED

Almost 2 years ago I wrote a post about x64dbg and why I don't use it in my work. People still comment on the article, so I decided to revisit x64dbg and see if anything has changed in past two years.
END_OF_DOCUMENT_TOKEN_TO_BE_REPLACED

Some time ago, Reoto asked a very nice question on Black Storm forum:

Can someone fix the .dll (.net) pe header to MS DOS?
How can I do that?
If you know about protecting .net files for Android, please help me.
I have another question.
Can I fix dnspy to resolve .dll pe header isn't .net?

Obviously, English is not author's first language but it seemed like an interesting problem, so I decided to look into it.

Here is one of the files in question: https://mega.nz/#!0g4VHaIR!KmpQirte4_3lv8MSxyjETiufjFGb-CITpFGrXwxSgGY

TL;DR: Mono loader used by Unity3D accepts invalid PE files. It can be used to break most .NET decompilers. dnlib and tools based on dnlib (dnSpy, de4dot) were updated on 20-Apr-2018 but the rest of the tools still can't handle such files.
END_OF_DOCUMENT_TOKEN_TO_BE_REPLACED